The importance of good daily record-keeping of every site activities

Disputes are a significant problem for the construction industry. This year, Arcadis reported that UK construction disputes have an average value of around £27 million – making them more expensive than their counterparts in the US and mainland Europe (but less than in the Middle East). Explaining its findings, the company was keen to stress ‘the importance of early dispute resolution, and ideally the avoidance of disputes altogether’.

This is obviously a worthwhile goal. But realising it will only be achievable with the help of a clear and unambiguous record of the work taking place on a given site each day. Let’s take a look at the ways a modern record system can protect everyone involved in construction from costly disputes, and bolster overall productivity in the sector.

Sub-contractor’s are often frustrated by not getting paid for the job they did. It can be difficult and time-consuming for them to prove that a particular piece of work was done. Especially in hectic site environments where dozens of jobs are being invoiced every single day.

This problem can be mitigated through a well-maintained site diary. Such a diary lists all of the work undertaken on any given period. It is searchable, intuitive, and exhaustive, and it empowers employers to process invoices more quickly and accurately. Arcadis reports that the most common cause of disputes is a failure to properly ‘administer the contract’ (that is, do the agreed work). By referring to a detailed and accurate diary, subcontractors can demonstrate they’ve done exactly that.

The Benefits of Digitisation 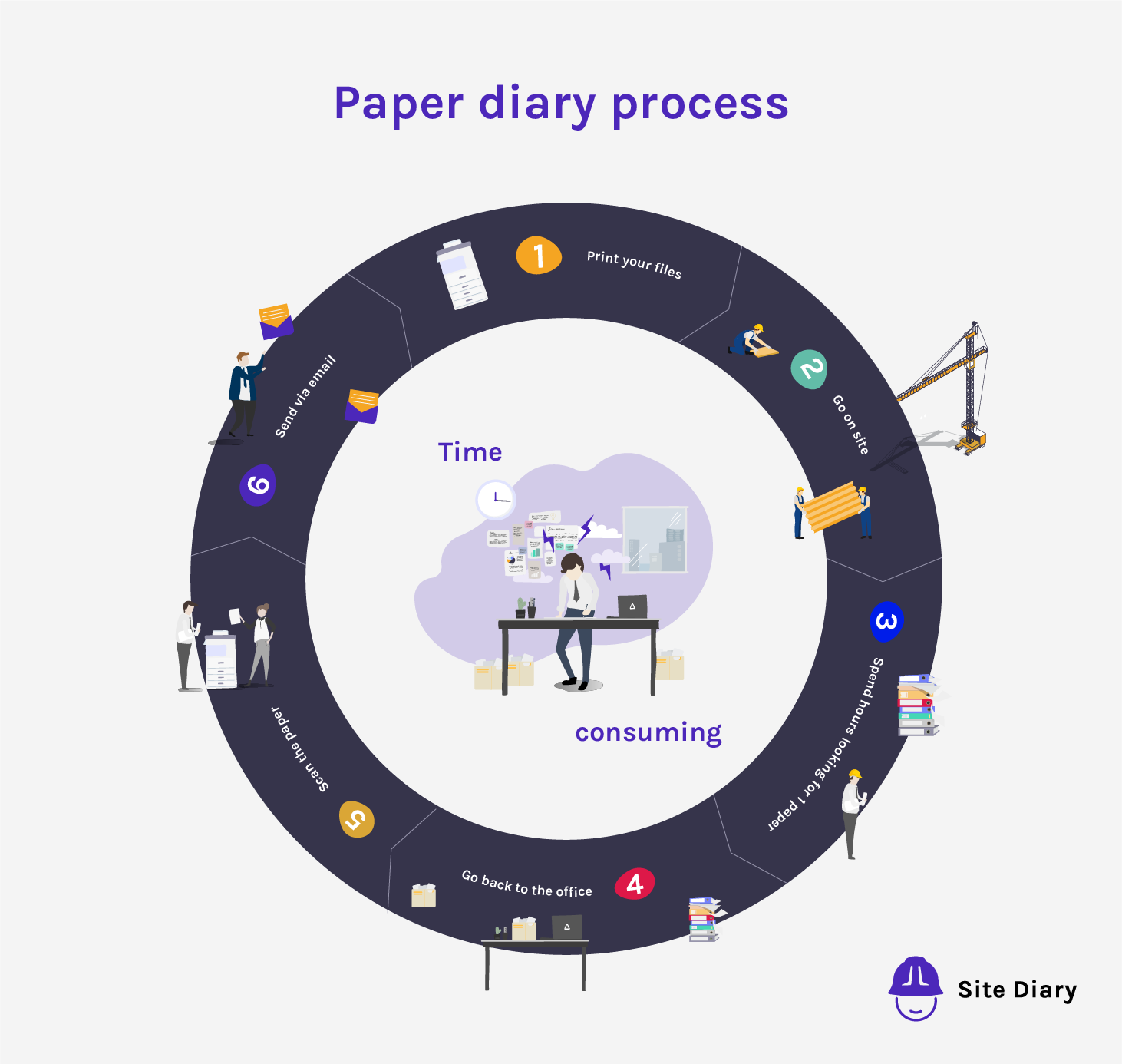 Traditional paper-and-pen records are time-consuming to keep them updated. They are vulnerable to damage and can easily get lost.  Particularly when they’re being updated in the less-than-ideal conditions of a busy construction site.

Contractors are obliged under the Construction Industry Scheme to keep a record of every payment being made to subcontractors, and these details must be kept for three years from the end of the tax year in which the invoice was filed. All of this data should be handed over to the client when a building project is complete. This amounts to a significant amount of information – and having a robust document management system saves considerable work in retrieving it.

The most obvious cost of a dispute is the legal expertise required to resolve it. Settling even a minor dispute requires investing time, money, and mental resources that might be better invested in laying bricks, running wires and fitting pipework – the tasks that actually contribute to the project in question.

But we should also consider the more diffuse costs of having to go through frequent dispute resolution. The cost of a negative atmosphere on-site can be more difficult to quantify, but that doesn’t make it trivial. Misunderstandings foster mistrust and cause avoidable stress. A toxic working environment can result, in which every worker is conscious of the risk they might not be paid promptly for their work.

Looking for an easy to use site diary?

When is a Job done?

Conflict can arise when parties disagree about whether a particular job is complete. The contractor and the company hiring them might have wildly different definitions of what ‘complete’ entails. Construction firms need to protect themselves against substandard work, while contractors must ensure that they’re going to be paid for the labour they’re investing.

In some cases, disputes can occur because of one party’s desire to shirk their contractual obligations and avoid responsibility later. But only a minority of disputes are a result of malice – when a contingency arises that the contract hasn’t anticipated, both parties have a natural incentive to protect themselves from liability.

The facts of psychology often prevent us from being objective and impartial in such cases – but if both parties can see that there’s a clear, objective record of the facts on the ground, they’re far less likely to escalate a disagreement into a formal dispute. 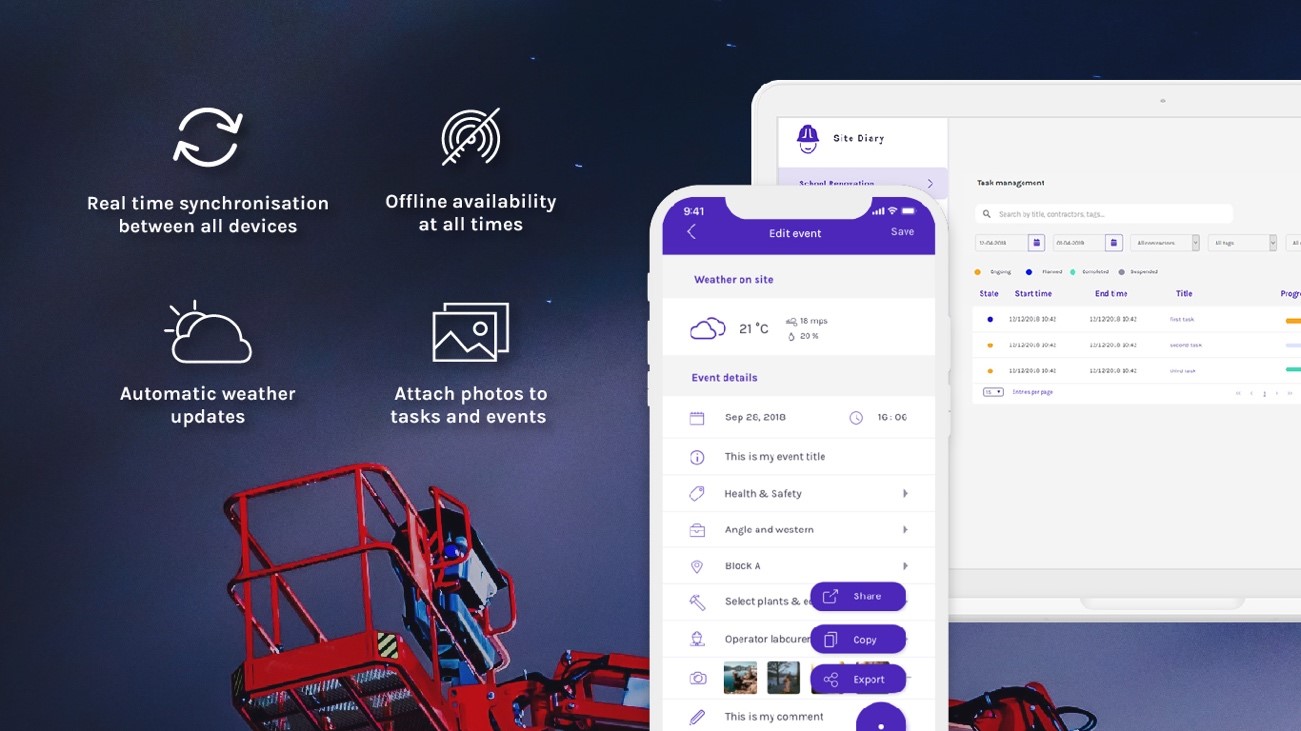 A worthwhile construction daily report is one that includes as much detail as possible. Let’s consider a few of the details that might make a real difference.

A Picture is Worth a Thousand Words

In record-keeping, images can be invaluable. They allow a record of the work to be kept in a way that isn’t open to interpretation, and for administrators to assess the progress of a job at a glance.

Anyone with access to a smartphone can now record an image of the work performed. These can be stored in a matter of moments. Then, months later, when it’s necessary to find out exactly what work was done, the information can be recalled easily.

Where Was the Work Carried Out?

Another potential source of confusion concerns location. Larger buildings might contain multiple rooms, all with similar dimensions. So, for example, an electrician might claim to have wired four two-gang plug sockets into an office – but if there are 18 offices in the building, this might result in the site manager having to physically inspect each one to determine where the work has taken place.

Accurate location records help to minimise this sort of confusion. Workers can put into their report exactly where they’ll be doing the work, and on what day.

A connected diary also has the capacity to add relevant information automatically. It might, for example, collect weather information. Should the weather on a given day be unfavourable, it might lead to delays. If this information is included in the diary automatically, it can help everyone understand why a particular job has been delayed.

We should judge a record not just by the level of detail and the ease of updating, but how straightforward it is to interpret. A record that’s incomprehensible, after all, isn’t much use to anyone; one that can be picked up and understood in seconds, even by those unfamiliar with it, is invaluable.

Through digital record-keeping, significant details can be automatically highlighted for increased clarity. The most notable candidates are price estimates and dates. Moreover, records from the site diary can be exported as reports in a range of formats, making it easier for decision-makers to easily see what’s going on at site level.

Where Should a Site Diary be Kept?

Another limiting factor on our ability to keep records is a lack of space to store them. A solution arises in the form of cloud storage; rather than having information stored on a hard drive in an office on-site, it’s stored remotely.

The first concerns data security. When records are stored in multiple remote locations, they’re far less vulnerable to human interference and accidental damage. A plausible worst-case scenario for a site diary that’s stored locally on-site might be that a thief simply wanders in and takes the server away.

This is a rare eventuality, but, given the notorious difficulty of securing a construction site, where unfamiliar faces turn up daily, it isn’t unthinkable. Were the entire diary to be lost in this way, a firm could easily find itself facing multiple disputes without any record to refer to. And a record that’s been lost, stolen or destroyed is one that can’t be relied on in court.

The second advantage of cloud-based storage is accessibility. Sometimes it’s useful to be able to check a site diary from a remote location. With a cloud-based solution, updates are instantly shared across everyone accessing the diary at the same time. This ensures all of the data being worked on is up-to-the-minute.

Finally, we should consider affordability. Keeping a digital record of site activity needn’t be expensive; it’s almost always cheaper to consolidate storage in a centralised location than it is for every site to have their own storage server containing multiple hard-drives. This service is typically offered alongside the software itself, with an outside company being responsible for the maintenance and security of any hardware being used.

Note that these securing these advantages needn’t require that those updating the diary need always be connected to the internet. On a building site, this would often be impractical – particularly if the site in question is in a location with poor mobile reception. In such a situation, any changes made to the record would be stored locally, and uploaded to the shared version of the diary when the connection returns.

While it’s unrealistic to expect to eliminate conflicts entirely, all parties involved in a construction project stand to benefit from detailed, accurate records of everything that goes on on-site. Modern technology provides a powerful means of maintaining these records. If the cost of disputes is to be reduced in the future, it’s crucial these tools are understood and used.

Get it now
Which of the app do you want to log in to ?