Site Diary is announcing today an update to its app which includes a newly designed PDF report to better present to your clients the work progress.

For several months, our users have been asking us for a better PDF report to send to their clients/managers about the work that is recorded in the site diary. Today we have made this possible. Here is what our new reports look like: 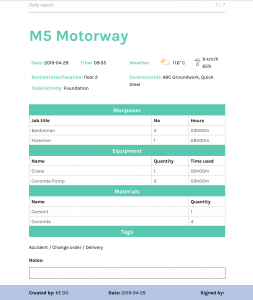 To continue on the reports, we have made it possible to export reports on the mobile app. previously, users could only export reports on the web desktop version. This means field workers can send their report directly when they are finished in just one click without the need to go to the office.

Other updates in the app

Site Diary was first developed by Swedish company Appear Network in 2014 as a part of the European-Union-funded MobiCloud Project. This first Site Diary was developed in conjunction with Costain and COMIT.

In 2016, French construction software developer Script&Go acquired Site Diary as a part of its strategy for international expansion as well as addressing the needs of field workers.

Since the acquisition by Script&Go, Site Diary is being used by more than 6,000 construction workers in 94 countries and more than 240,000 diary records were createdbetween 2016 and 2018.

Site Diary is a construction diary and task-management app that keep records of everything that happens on site while having visibility on work progress.