Interoperability – the key to construction productivity

The market for construction-focused software is, at present, saturated. One popular database of construction software lists just over 300 separate programs. This affords the user with unprecedented choice – but if these programs don’t play nicely with one another, they can cause more problems than they solve.

It’s for this reason that a new buzzword has gained traction in the world of construction-focused software: interoperability. Let’s explore this term and see exactly how interoperable software can make life easier both on-site and off.

What are the types of interoperability?

The term is relative; you might think of one program as being more interoperable than another. Moreover, there are several types of interoperability – three or four, depending on who you ask.

At the base of everything, there’s the technical foundational ability to shift bits of data from one application to another. But doing this isn’t worth much without syntactic interoperability – this restricts the data being exchanged to pre-agreed formats and protocols. For example, we might exchange documents based on XML syntax, upon which a wide range of word-processing programs is based.

We can take things a stage further through semantic interoperability, which deals with the meaning of the data being sent, rather than just its syntax. When two systems are semantically interoperable, they are able to exchange data, and interpret the data received in the right way. This is achieved through a shared vocabulary which allows both the sending and receiving party to agree on the definition of every term.

Today, this is achieved using meta data: that is, information about information. A web page, for example, might come with a series of meta-tags which describe its content for the benefit of search engines.

In a construction-focused application, we might assign meta information to a quantity of something to describe the unit being used. Figures which describe weights and distances might specifically be in kilograms and metres, for example. The inventor of the World Wide Web, Sir Tim Berners-Lee, is widely credited with coming up with the term ‘Semantic Web’ in a 2001 article for Scientific American – but the idea of semantic networks has been around since the 1950s.

Data isn’t just exchanged between systems, but by the people and organisations that use them. A fourth standard is therefore required: organisational, or cross-domain, interoperability. This allows for data created by one organisation to be easily understood by another. For example, the various firefighters, aid workers and helicopter pilots working on a disaster relief effort should be able to intuitively pool their knowledge through an organisationally interoperable database.

In practice, true interoperability means paying attention to the way that data is presented to the user, as well as the way that it’s recorded and transmitted. When we’re sharing information using smartphone apps on a construction site, this might mean standardising layouts, colour-coding and other seemingly superficial qualities so that the user experience across separate apps is broadly similar, even if the apps in question serve totally different functions.

Why is interoperability important? 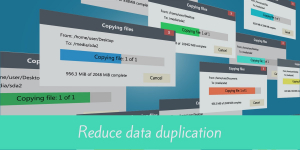 When programs are interoperable, they eliminate working hours that might be spent issuing (and waiting for) instructions, and translating data created in one program into a form that can be understood by another.

Let’s take the example of a construction site, where activities are logged in a diary. If every worker were to record their work in non-interoperable form, they would need to then repeat this report to a central site administrator. This might mean filling in another form and sending it across via email. This not only generates extra labour; it also creates an opportunity for information to get lost or garbled. Moreover, it generates stress for the entire workforce.

A solution to this problem might come in the form of an interoperable site diary. Rather than having every worker on-site make a separate record, they could all contribute digitally to a single centralised one. This database would be updated instantly, and could be accessed from anywhere. This confers enormous benefits, as it streamlines the administrative workload.

Similar benefits might be accrued at different stages of a construction project. Architects and structural engineers might, for example, collaborate on shared blueprints, while project managers might put up shared timetables so that those overseeing a development might assess its progress. Put simply, interoperability oils the gears of the workplace. It eliminates the friction caused when information can’t be easily exchanged between those collaborating on a given project.

In the world of construction, this is especially advantageous. Even smaller-scale building works might involve scores of different professionals coming and going from a site over the course of a build. The task of managing these people can easily escalate into an administrative nightmare – but if they’re all equipped with interoperable smartphone applications, the considerable task of logging all of the work can be divided into 20-second chunks and distributed to the people with the best possible knowledge: the workers who are actually doing the work.

For the better part of a decade, the UK’s productivity has been lacklustre. And the construction industry is at particular fault. This is a problem with many complex causes, and it will require a multifaceted set of solutions. But any innovation that can reduce working hours, eliminate mistakes, and lower stress levels is one worth considering. Interoperability, all-in-all, is therefore something that the industry should take seriously.

Given all of these advantages, you might wonder why software isn’t more interoperable. Part of the answer lies in commercial incentives. Whenever a developer makes their software interoperable with other pieces of software produced by a competitor, they provide the user with a reason to use that rival piece of software. On the other hand, developers that deliberately keep things non-interoperable provide no such incentive.

This provides bigger developers with a means of entrenching themselves. For example, suppose that a large group of people are collaborating on a project, and a large majority of them have decided to use the same program. If that program isn’t interoperable with the alternatives, then everyone who wants to contribute will be forced to switch software. In this way, manufacturers can effectively force people to buy their product by ensuring that their software isn’t interoperable. You can see this principle at work when hardware manufacturers like Apple release proprietary power supplies running at non-standard voltages, forcing you to pay over the odds whenever a replacement is required.

Where software isn’t interoperable, it needs to cater to the user’s every possible requirement. This results in larger developers attempting to create enormous applications that please everybody. The problem with this approach is that it’s near-impossible for any program to do everything well, however well-financed it might be.

Programs of this sort will seek to cover every base, and thus they’ll invariably ship with features that only a minority of users will use. For most, these features will be extraneous; they will hog system resources and make the program less intuitive. Just think of Script & Go’s Site Diary application: the person administering the information will need access to more powerful features than those simply recording pictures and short descriptions of their work. Why burden the latter with the program required by the former?

A better approach comes in the form of a series of highly specialised programs with a very narrow focus. These programs could each do one thing well. If they’re sufficiently interoperable with one another, then a selection of them could do the same thing as that cumbersome one-size-fits-all application. The end user could then pick and choose which apps best match their needs, and discard the remainder. The result? Better performance, less confusion, and superior productivity.

How can we make the industry more interoperable?

The European Commission recognised the benefits of interoperability more than a decade ago by adopting a list of standards for communication networks to follow. But these were largely geared toward phone-network providers rather than niche software developers. Moreover, waiting for instructions from Brussels would be the wrong approach, even if Brexit were not looming.

The industry should instead take a more pro-active, collaborative approach, and agree to communication standards of its own accord. This would confer several immediate benefits for frontline construction firms. It would, for example, make it easier for smaller app developers to enter the market, and it would allow for the easy development of bespoke solutions.

This might mean assembling the industry’s biggest names to settle upon technical standards, which can then be codified and referred to by future developers. These standards needn’t always be technical. Agreeing on the meaning of certain symbols and colours can help to make applications more intuitive: just think about how a triangular road sign carries the same meaning across most of mainland Europe (with the colour red acting as a warning sign across most of the worlds).

Graphical user interfaces (GUIs) rely to a large extent on a user’s expectations. If everything responds as anticipated, the GUI is considered intuitive. This means that developers naturally imitate one another’s designs, and a consensus is settled upon naturally. Best practices can then be compiled in a list of design guidelines, much like those maintained by Microsoft and others.

The frictionless exchange of information between computer systems can result in substantial productivity improvements. Interoperability allows software to be made more nimble, freeing up working hours and allowing workers to do their job. In the often-chaotic world of construction, these advantages are sure to become indispensable!